Take the Kids to the Nearest Disc Golf Course. They Will Love It!

Disc golf is a great sport that kids really love to play. Courses are everywhere, and it is an easy game to learn. So we have put together a short guide to get you and your family going on the disc golf course. This includes: how to locate the nearest course, learning the kid-friendly rules and where to get a few discs to start throwing with. 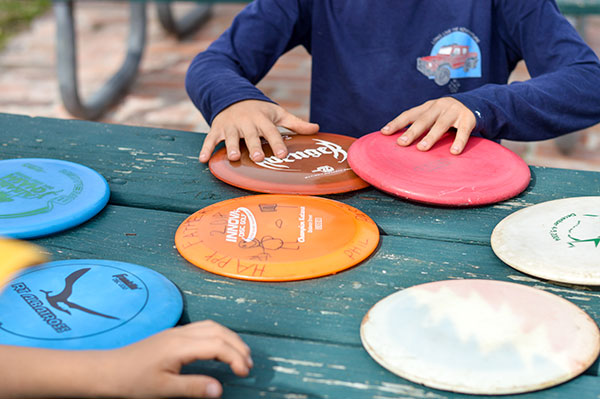 It doesn't take much to get started. Each player will need at least one disc, but I would recommend 3: A driver, a mid-range and a putter. If you do decide to only play with one disc, then the best thing to do would be to get yourself a mid-range since this is best suited to function as all three.

We have put together a short list of disc golf essentials. It isn't much. You could easily get out and playing for under $20.00 per player.

~ take me to the equipment ~

But Where is the Closest Disc Golf Course?

You can start out with a simple Google Search. Just include your city name with the keywords Disc Golf Course. You can also type these keywords into Google Maps. Don't be surprised to find one or more in your area that you have been driving by for years. And the great thing is, they are almost always free!

Another great alternative is to download an app for your phone. There are a number of free and paid apps that will do the trick. We recommend UDisc which is available for both Android and IPhone. This app has a great course locator map listing over 7,000 courses from around the world. It will also keep track of your score and the courses that you have played.

Trying to keep things as simple as possible, these are the rules of play that make things fun and slightly competitive. Kids love to have a challenge, and they love to win, but you don't want to frustrate them with too many rules from the start. If they develop a love for the game and would like to learn more, here is a link to the official Professional Disc Golf Association's Rules.

If you know the rules to ball golf, then you are already almost and expert. The main difference being that you are trying to get the disc in the basket and not a ball in a hole. 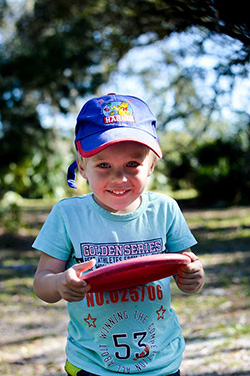 Many courses give you different tee pads on each hole from which to make your first throw, or drive - again like ball golf. Usually there will be pro and amateur pads to throw from. Pro pads are commonly marked with blue and amateur with red. It definitely makes sense to start on the amateur pads. They are usually considerably shorter and have a more open path to the basket, or both.

..there is no minimum age for disc golf, other than the level of your patience

This is about as technical as we are going to get here. No reason to take the fun out of things, but kids can be very persistent about going first, so knowing the rules might help keep battles between siblings down to a minimum. On the first pad it is probably best to let the youngest go first. On the following pad, the person that took the least amount of tries to get the disc into the basket on the last hole goes first. If this was a tie, look at the previous hole between those tied in order to determine their order. 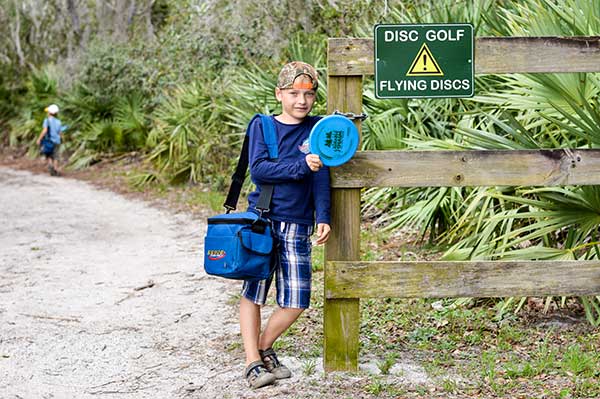 Here is a very important rule! After the initial drive from the pad, the person farthest from the basket always goes first! Disc golf discs can really hurt you, especially if you get hit at close range from an over-zealous teenager. But, if you respect this rule, you won't have any problems. Except, give a little extra room for extremely young players. They can hit you even when you are 10 feet behind them!

From the pad, you are allowed to run up to the end for your throw. This will give you more momentum. You can either backhand, which is like a normal Frisbee throw, or you can do a forehand flick. In the case of the forehand flick, you place your index finger along the inside rim of the disc and and your thumb on top. You then throw the disc like a side-armed pitcher, giving it a strong flick with the index finger as you let it fly. On both throws, practice keeping it low and learn to overcompensate its angle to fight the natural tendency of the disc to turn on you.

When you come up to your second throw, if it is a long throw, you might still want to run up on it. Here you might also decide to switch to your mid-range. You should leave a disc on the ground as a placer, so that you don't overstep its original placement. If you choose to throw from a standing position, make sure one foot is behind the disc and the other is not closer to the basket than the foot behind the disc. Again, if you need the disc for your throw, just replace it with another.

When putting, the most common method is to place your index finger along the outside rim of the disk with your thumb on top. Fan your other three fingers along the bottom of the disk. Throw the disc from out in front of you. You can use a rocking motion towards the basket to help you establish a straight line.

If par was '3' on a particular hole, but it took you 5 shots, mark a +2 for the hole. If, however, you got a birdie, give yourself a -1. Add up all of these positive and negative numbers after the match is over and each player will have his score. Whoever has the lowest score has won!

Or, throw away the score card and just play for fun and to see some cool shots! 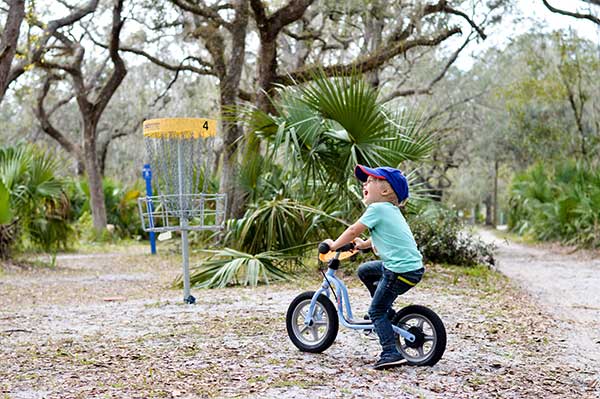 The following list of disc golf products is put together in order to get you started on the disc golf course without overloading you with items that you won't need at first or discs that are not designed for beginners. A short description of each item and how it will benefit you should suffice to help you make your choice.

The links to purchase these products are affiliate links. Purchases made through these links result in a small commission for kidswithouttablets.com, helping to fund our endeavor